It's expected that shit will just go wrong on an old bike, with no regards to how much money you spent, how much time it took you to put it together or how many bikes you've built in the past. If you ride your motorcycle, shit will happen.
This has become a common theme for all of my trips here in Europe. It's either the bike, the weather or me that is failing at some level.
Example would be almost every morning in northern France, I spent the first 20 minute of the day digging through the tool bag. Minor problems, but still problems.
Finally it had seemed things had worked themselves out, but on my way to Toulouse, several weeks later, the bike ran great, but as I had said before, I ran into some of the worst weather to date on this trip. I didn't mention, that I had also ran out of fucking gas 3 times that day, as I navigated back roads and short cuts in an effort to avoid the shitty weather.
Ok, plan your stops better, no problem. So last weekend, going to Chimay, we pulled into town, easy ride, no weather, no problems, and the group got separated. I decided to go and catch the stragglers, and told them to pull off and I'll explain directions. As I am giving them these very directions, the bike sat idling, and unbeknownst to me, was rolling backward down the street, until it finally fell over. Fucking mother fucker.
So at the end of a problem free day, I still had to find a welder and fix my carb support and sissy bar. The air filter was replaced a couple days later. And so, now it's back to usual, with shitty weather, more long days and who knows what will be next.
But with all this being said, I would do every day again, and would actually be worried if nothing ever went wrong! If it was easy, every poser would do it. And if you see me on the side of the road, pull over and give me a beer! See you out there 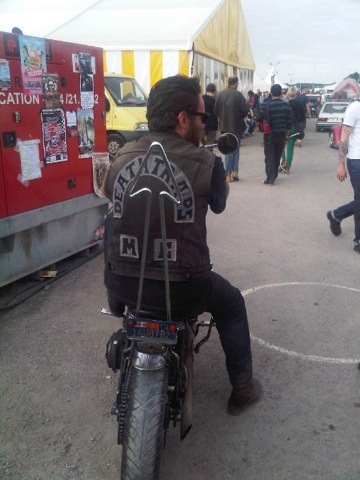 Labels: knock on wood, Welding in Belgium
Newer Post Older Post Home
Deathtraps Motorcycle Club is made up of a core group of riders who believe that the sole purpose of owning a chopper is to ride the living hell out of it.