After the Swedish crew re supplied for the next couple of days, and everybody got a quick bite to eat, we said our goodbyes, "see you all in a couple of days, not sure where!", and we hit the road, heading west towards the Norwegian border.
On our own again, with impending rain, we encountered our first flat tire of the trip. Thankfully we had some fix-a-flat foam shit with us, and after repairing the nozzle (of course) we were back on the road. Destination for the night was Tønsburg with Rabalders MC. A perfectly timed ferry boarding, we met Rabalder on the road and followed them to their clubhouse for some BBQ and beers.
Wolf repairing the bottle so he can repair his tire. 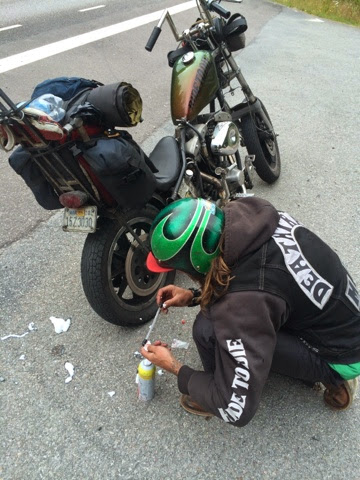 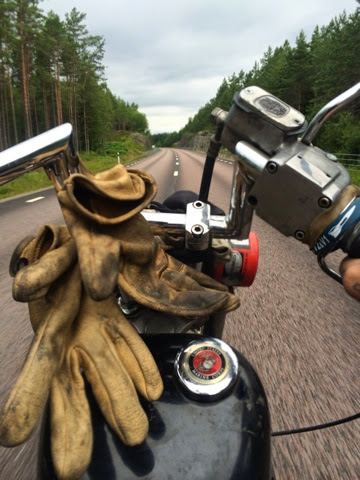 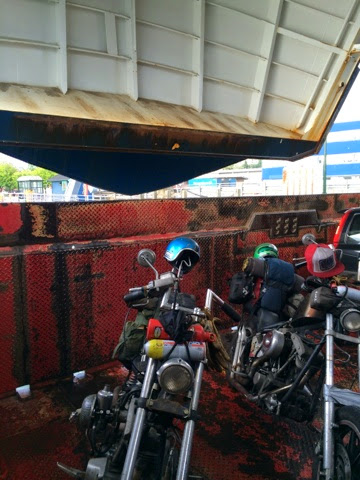 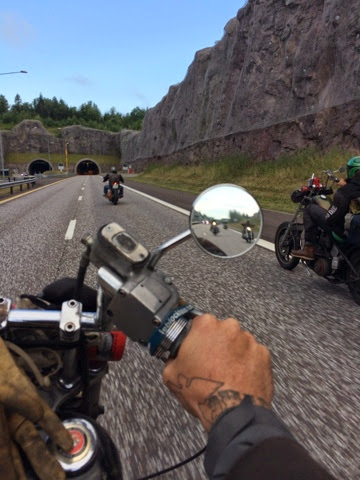 Next day down to see the Viking ship... 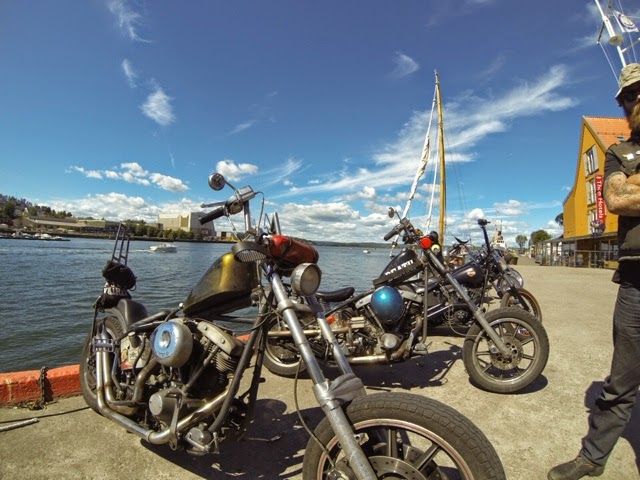 ... but we had to settle for another one being built in the same tradition as the original ones. I guess it was in Oslo for some reason.?! 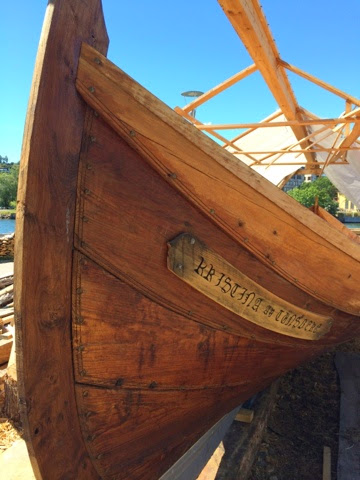 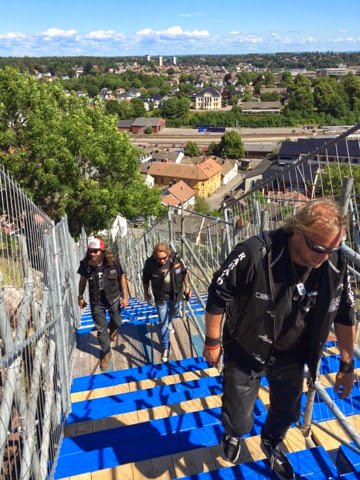 On top of an old Viking tower, overlooking the entire city. 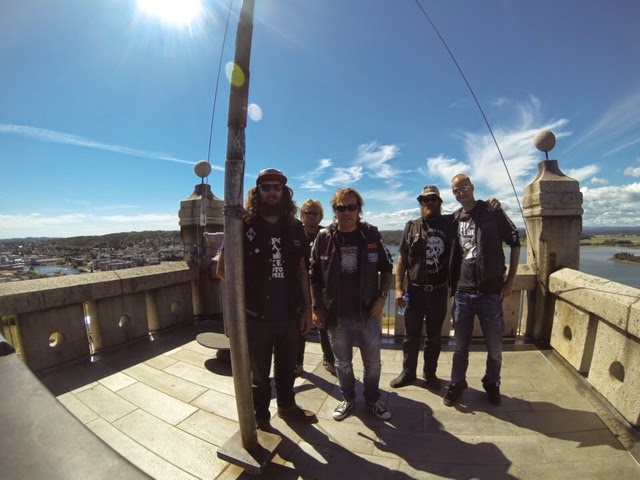 Out at the end of the earth. 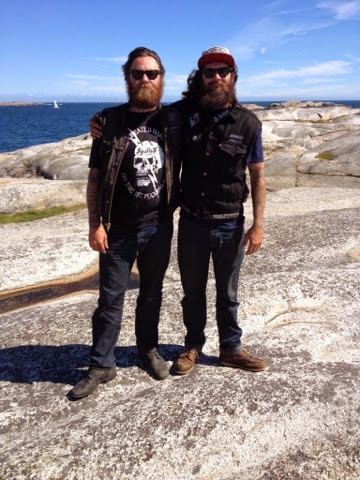 After our great tour with Rabalder, we left for Fredrikstad, again on the ferry, to go meet up with the Chopper Freaks MC.
VIP seats 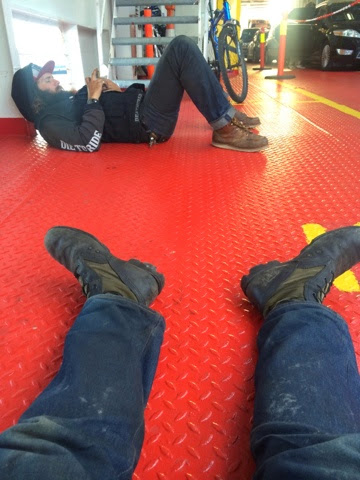 Following the Chopper Freaks to their clubhouse. 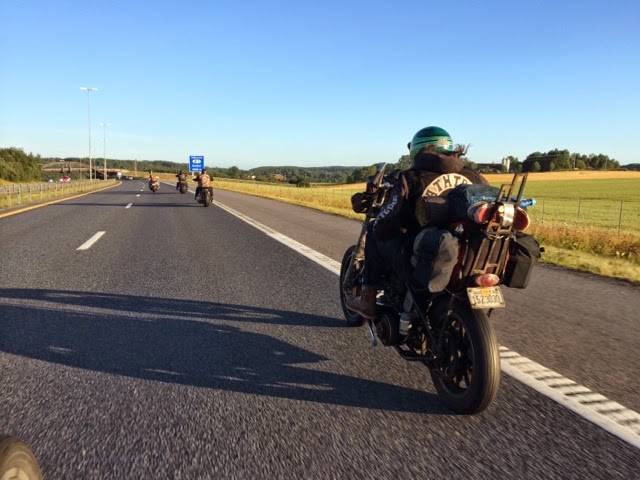 Next day: new rear tire for Wolf. Badly needed oil change and cleaning for my bike, and me. 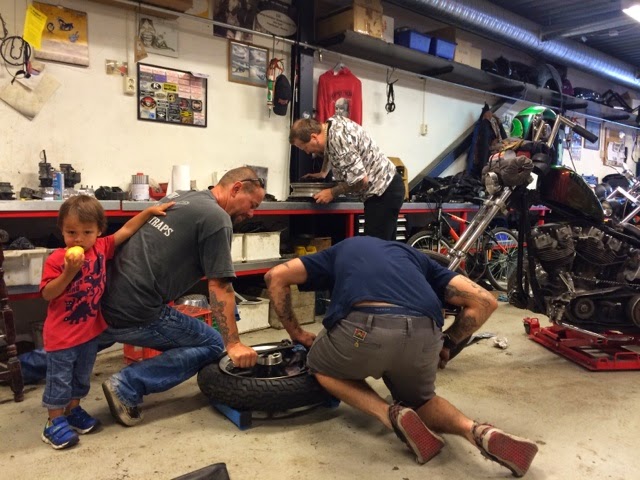 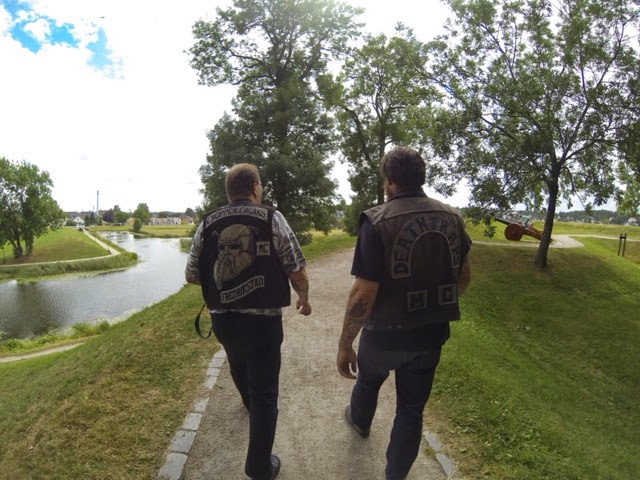 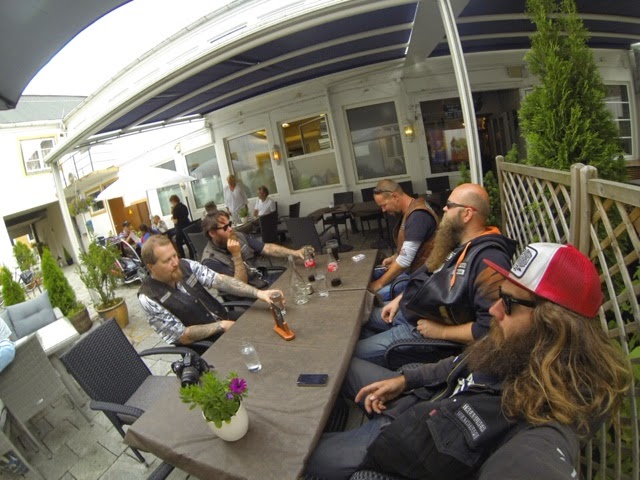 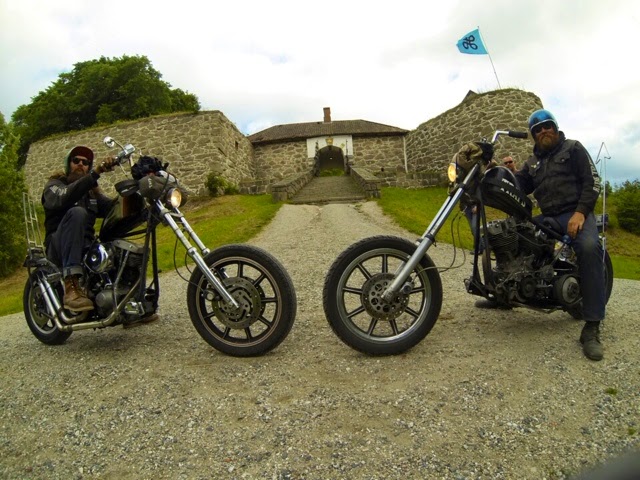 With the sun shining the next day, we headed out to the sea. Taking some Norwegian back roads to get there! 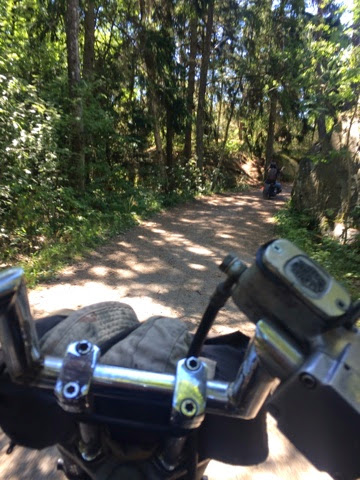 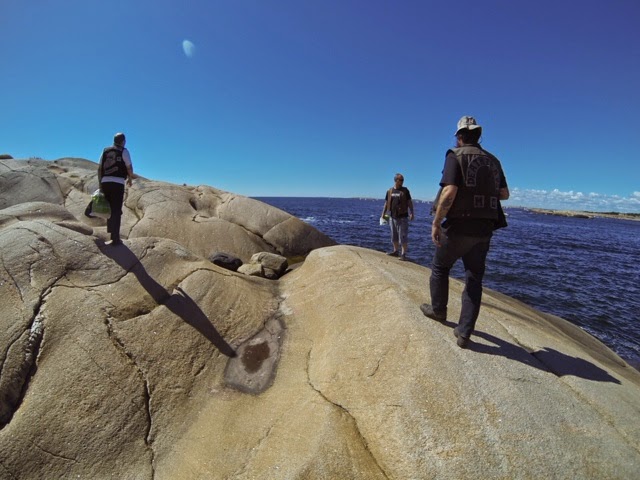 Thanks for the shorts Atle! 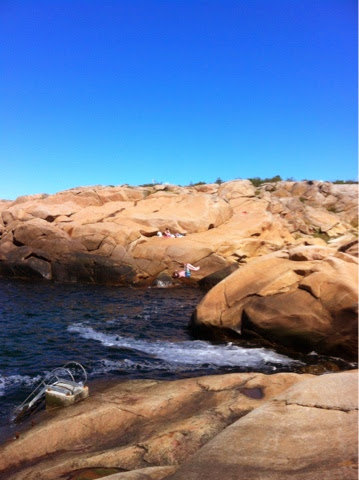 We enjoyed the water for awhile and then Captain Morton showed up, and took us out for a tour of the islands and coastline. 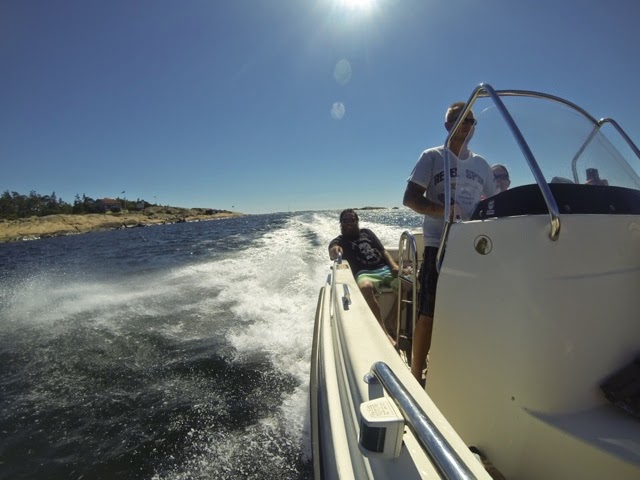 Taking the open waters on the way back to the bikes 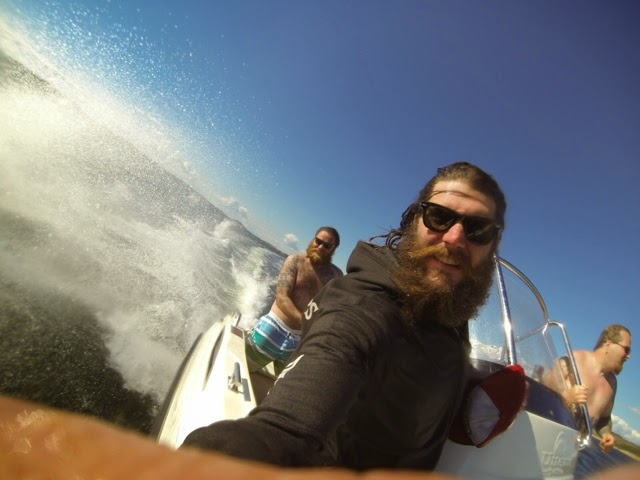 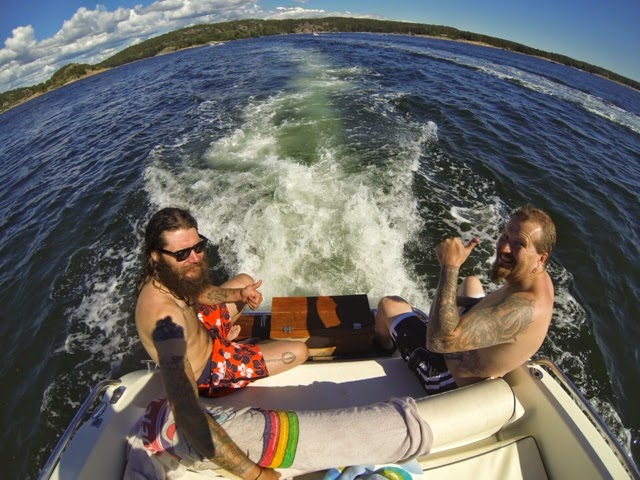 Last night in Norway, bellies full of fresh shrimp, thanks Steve, and catching up on our buzz with Mac and our trusty Captain, Morton. 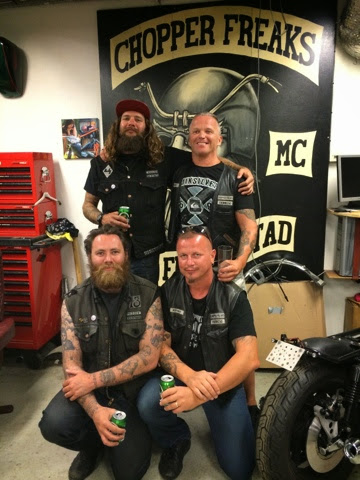 Next day, or afternoon, Atle and Morton led us to the border. Our next destination was somewhere in Sweden with the remaining crew from the Fückerfest. 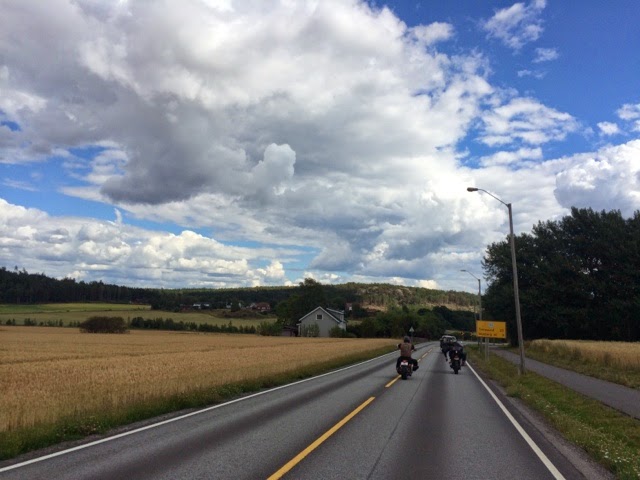 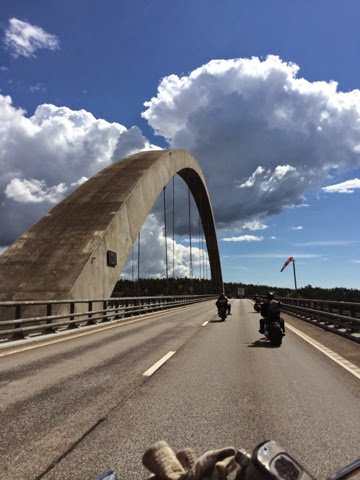 Thanks for the great time in Norway everyone! We'll see you all in a couple of days in Opmeer!
Posted by jbweldon at 5:41 AM